BACK TO FULL TOUR

A Garden Nurtured by Generations.

I, Philip Van Soelen, purchased this home in Sebastopol in 1978 and lived/gardened there for over 35 years. The first work was breaking through blue shale road-base with a pick and shovel, loosening the underlying sandy soil and creating terraces for the gently sloping lot. The lot is a long deep lot 150’ x 65’ that gently slopes to the house at the back of the property. A seasonal stream/drainage ditch flows across the property. I accentuated this slope by terracing in several contours, planted fruit trees & a native plant garden. My Daughter and Son-in-Law moved in in 2015 and subsequently purchased the property. They took on the garden maintenance and were a quick-study learning the plants, simplifying the plant palate & making beautiful additions to the plantings & hardscape. Fruit trees were established and an underplanting of native shrubs and perennials was developed. Although the understory has generally been simplified since my time, the multilayered plantings of trees, native shrubs & many native perennials remain. The combination of topography & sandy soil makes the garden a perfect match for drought tolerant native plants. The numerous upright Manzanitas, Arctostaphylos species in the garden create important structure, several are 20 to 30 years old. All are locally adapted and prosper with no supplemental irrigation.

The most notable feature of the garden is the many mature manzanitas, Arctostaphylos species.

Some are commercially available named selections, Cultivars. Many are un-named selections propagated by cuttings taken in the wild or from Botanic Gardens with permission. Now having grown for over fourty-years, the manzanita plantings are layered with very tall tree-like manzanitas with medium sized and very prostrate species below. Manzanita anchor a garden rich in mature natives including (Fremontia, Garrya, wax myrtle, Catalina cherry, salvias, ribes, native grasses, nine-bark, fern species, Sedum, Dudleya and numerous others. Many that have lived and thrived for decades. The garden very drought tolerant & spot watering is infrequent.

The garden has no irrigation system. Watering is done with a hose & water-breaker. Infrequently a sprinkler is allowed to soak an area. A French drain catches seasonal runoff from the neighbors uphill and can become a torrent in good rains. Some of that moisture sustains a very large Coast Redwood tree, planted as a one gallon 45 years ago. The generous pathways & open-spaces in the garden have been cleared of weeds with a burner and mulched with pea gravel. 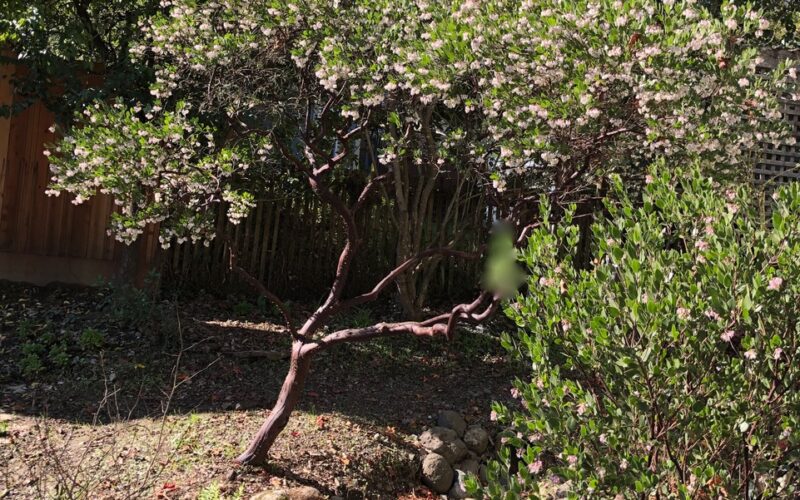 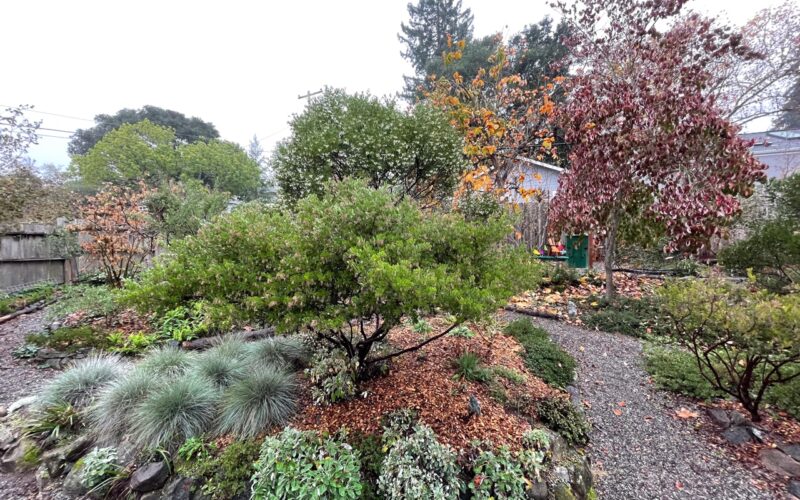 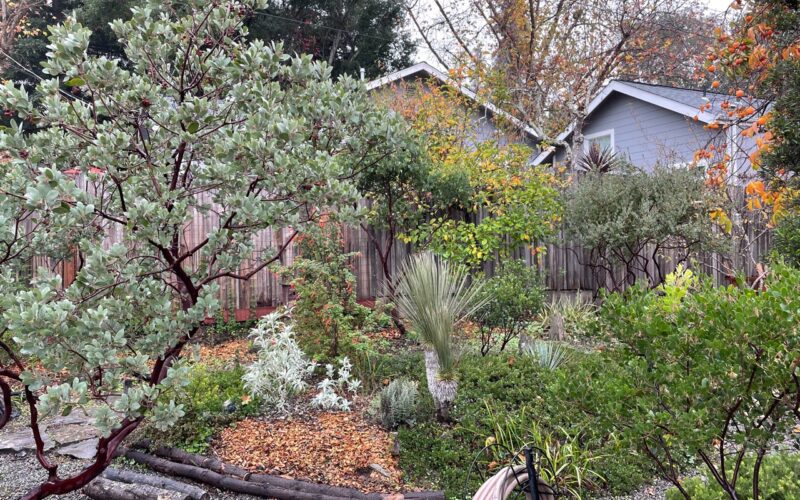 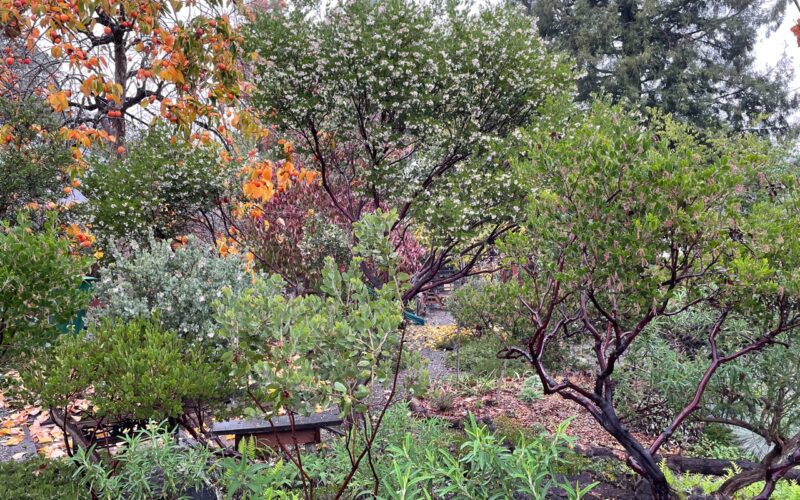 Manzanitas vary from carpet-forming groundcovers to small trees. Manzanitas have varying shades of striking, reddish brown bark and can provide structure to a garden. These plants have evergreen foliage, small white-to-pink, urn-shaped blossoms in late winter to early spring, and then small fruits that resemble tiny apples.

Evergreen shrub that has insignificant flowers followed by black berries. Flowers are attractive to pollinators, especially bees, and berries provide a food source for birds. Cultivars commonly sold in nurseries have differing growth habits and are often smaller than the species which grows 5-18’ x 10-18’.

Diverse group of flowering, evergreen shrubs and perennials and annuals found throughout the western United States. Most available in nurseries are native to California and generally prefer drier sites. Flowers colors include yellow, white, pink, and red and are held above foliage in umbels that dry over time and are popular in flower arrangements. Buckwheats provide pollen and nectar for bees and butterflies, larval food for butterflies, seeds for birds, and cover for many creatures.

Iris are a large and diverse group of perennials that grow from either bulbs or rhizomes. The California native Douglas iris and cultivars known as Pacific Coast Hybrids are an excellent choice for summer-dry gardens and understory plantings. Fall rain brings new growth in the form of thin, upright leaves, followed in late winter to early spring by the first blossoms. Douglas iris commonly ranges in color from lavender to purple, but cultivars are available in a range of colors including white and yellow. Established plantings can be lifted and divided after the first significant fall rain and either replanted or put into containers to share with others.

Large group of evergreen and deciduous shrubs and trees that includes many ornamental species as well as others that produce edible fruit.